New Trustees for the Friends of Coppett Hill

At a well attended General Meeting of the members on 20th July, five new trustees were elected to take the Friends forward

We look forward to continuing our role of supporting the conservation work carried out on Coppett Hill Common.

If you have any ideas or proposals as to how we should be working in the future, please contact us on friends@coppett-hill.org.uk

The visit to the West Midlands Butterfly Conservation site at Grafton Wood near Worcester , on 5th July, was enjoyed by 13 members of the Friends and Shareholders.

John Tilt, the Reserve Manager gave an extended tour of the 100 acre wood which is divided by wide wild flower filled rides which were rich with butterflies, telling us the history of the site and the way it was managed.

While many of the species were familiar to us from Coppett Hill, including the Marbled White and the Siler Washed Fritillary, the highlight was a White Admiral – which was a first siting for most of us.

Unfortunately the visit was too early in the year to see the Brown Hairstreak, for which the reserve is the only site in the West Midlands.

working party, as it was so well attended.

An update on Trust Projects

GRAZING
The Trust is hoping to reintroduce some controlled grazing as a special project to improve and enhance the biodiversity, control the tufted and rank grasses whilst encouraging wildflowers and a wider range of grasses. Feedback about this so far has been positive.
The bracken rolling has reduced and weakened some of the bracken, allowing grasses and brambles to grow. These subsequently need some control either by grazing or mowing to prevent them becoming too rank or brambly. We will see what happens and monitor it carefully.

Areas that can’t be grazed may be mowed in the future. The aim is to keep and increase the open area on the hill but with a wider variety of plants eg nectar producing plants for butterflies.
The Trust will survey this area for flora before and after grazing.

- DEW POND RESTORATION
The Trust is working on a new project to rediscover and reinstate the Dew Ponds on the top of Coppett Hill and has just received permission to investigate and pursue the project further.
. The ponds are the only water source on the top of the hill and the plan is to put them back to a condition where naturally replenished water can be retained throughout the year for the benefit of wildlife. In the past it has been reported that the ponds held water throughout even the summer months.

Nigel Hand, a wildlife expert with experience in restoring ponds in the county has been assisting and has visited the ponds site twice to give us his advice on how the Trust should proceed. The scheme will be presented at the autumn Trust AGM for shareholders to have a look at and discuss.” 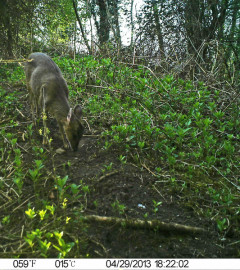 After several years of sightings in Bishopswood, across the Wye, muntjac have now arrived and are now breeding on Coppett Hill.

Follow the links to find out more about our