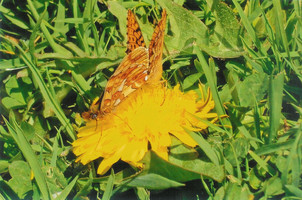 With its range of habitats, Coppett Hill is home to about 25 species of butterfly. The most common or well-known species include Small and Large White, Peacock, Small Tortoiseshell, Red Admiral, Ringlet, Meadow Brown and Gatekeeper. But the hill is also home to some less well-known species and the table below gives details of when and where to see some of these.

It is best to look for butterflies on warm, sunny, still days. They tend to stay hidden if it is too cool or wet.

Coppett Hill has long been recognised by local people as a haven for butterflies. On a warm, summers day, a walk along the ridge path and down the face of the hill is a rewarding experience for people who enjoy seeing these beautiful insects; Ringlet, Meadow Brown and Gatekeeper thrive on the unimproved grassland, and Large Skipper, Marbled White and Small Heath are also regularly seen.   Even on relatively cool days in spring butterflies can be found in sheltered spots – Speckled Wood, Peacock and Small Tortoiseshell are among the first to emerge, and our most prized butterfly, the Pearl Bordered Fritillary, is on the wing as early as late April.

Back in 2000, The Trust began regularly and systematically to monitor butterfly numbers and species on Coppett Hill. This monitoring continues to the present day. On one occasion each week, from the beginning of April until the end of September, a local volunteer walks the same route, and records the butterflies seen along the path. This weekly transect is part of a national scheme run and coordinated by Butterfly Conservation.

Our transect results show that, of the fifty or so species of British butterflies, about half are found on Coppett Hill. On a national level, over the last fifty of sixty years, butterfly numbers have declined steeply. On Coppett Hill, since our records began, there have been fluctuations in numbers, but, even despite the recent run of cool, wet summers, it is probably fair to say that our numbers are steady. One butterfly that receives considerable attention is the nationally endangered Pearl Bordered Fritillary. Coppett Hill is one of only a few sites in Herefordshire where this butterfly can still be found. With the help of Butterfly Conservation, The Trust, with its volunteer workforce, has carried out habitat improvement work over recent years, aimed at securing the future of this butterfly on Coppett Hill. Although numbers are still low, signs are encouraging!

The table below gives total butterfly numbers recorded in all transects during 2012. While it is not possible to draw many conclusions from this data alone, it is still possible to get an idea of relative abundance of one species compared with another. Where a figure of 0 is recorded, this species has been recorded on the hill in previous years, but was not recorded in 2012.