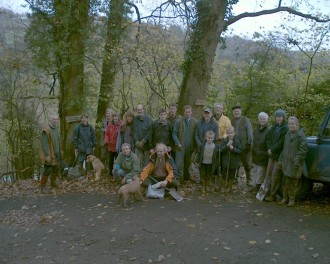 When the Common came on the market in 1985, a far sighted initiative by people in Goodrich led to the formation of the Coppett Hill Common Trust Ltd which bought the Common for £35,000.

This money was raised by 70 local residents who put up £15,000 and bought shares in the company (shareholders must live or own land in the Parish and can own up to 5 shares which cost £100 each), in addition Goodrich and Welsh Bicknor Parish Council and Herefordshire Council each contributed £10,000. Over time, other residents have bought shares and there are now over 100 shareholders; the company is set up so that any surpluses must be fully re-invested in the management of the Common.

The Trust is managed by a team headed by five directors. Three are elected annually by the resident shareholders (at an Annual General Meeting) and one can be appointed by each of Goodrich and Welsh Bicknor Parish Council and Herefordshire Council. The directors work with a management team drawn from Trust members, supported by specialist professionals, particularly in the area of woodland management

The registered charity, Friends of Coppett Hill, was formed in 1994 with the specific aim of helping the work of the Trust by raising funds to support projects. The Friends allows those who do not live in the Parish, and those who prefer to contribute through an annual subscription, to support and become involved and better informed about Coppett Hill.﻿ 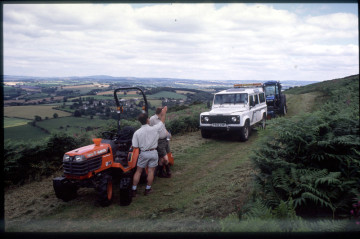 Working on bracken management with the Herefordshire Council Rangers

In 2000, the Trust applied for and was granted the status of Local Nature reserve for the whole 96 hectares of the Common.

As with all commons where traditional management by commoners has ceased, open areas without management will rapidly revert to scrub with the loss of valuable flora and landscape value. The Trust works closely with both the Forestry Commission and Natural England and has developed, and is carrying out, agreed long term management plans.  Grants are received towards the work but much of the management of the land is undertaken by local volunteers and working parties are organised throughout the year covering projects such as path maintenance, woodland management, coppicing and scrub and gorse control on the open areas.  We also are grateful for the help and support received from other local organizations such as the Wye Valley AONB, West Midlands Butterfly Conservation and Herefordshire Nature Trust.﻿