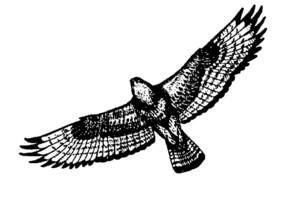 The Buzzard is the logo of the Trust

There has been no recent overall monitoring of bird life on Coppett Hill, though the Trust has erected some 50 bird boxes, mainly on the east of the hill. It had been hoped that they would encourage pied fly catchers, but to date they are occupied by great, blue and coal tits and the occasional nuthatch.  The birdbox data is reported to the Herefordshire Nature Trust as part of their county-wide monitoring system.

Of the raptors, the buzzard is the most populous species and can almost always be seen over all parts of the hill. There is also a pair of goshawks nesting on the site and the peregrine falcons, nesting on Coldwell Rocks at Symonds Yat can be readily studied from the far south of the area. In addition there are sparrow hawks and the rarer hobby and red kite have been seen. (However, the best place to view the goshawks and peregrine falcons in the summer is from  the RSPB viewing site on Symonds Yat Rock.)﻿

The woods on the east of the hill have greater spotted and green woodpeckers, nuthatches and tree creepers. The meadow pippit and spotted flycatcher is present on the west as well as the stonechat and whitethroat.

As an indication of the sorts of bird species you might expect to see on the hill in mid summer, the list below was reported by the Herefordshire Ornithological Society on a Herefordshire Walking Festival Walk in June 2011﻿