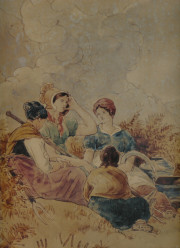 The Fern Burners by Joshua Cristall

The name 'Coppett Hill' is fairly recent – earlier it was 'Coppet Wood Hill', or in the 13th century 'Coppyngwode'. The name suggests that the side of the hill in Goodrich has been fairly bare of trees for a long time, as it means either 'coppiced' or 'topped with a crest of trees'. This reflects the extensive use of charcoal for iron-smelting, as many Goodrich fields are full of slag resulting from the process from the Iron Age onwards.

For hundreds of years, the Hill belonged to the land-holding or manor now called Goodrich, though this name only goes back to the Norman Conquest. The land is mainly too steep for cultivation, though there are remains of a field boundary just below and to the east of the trig point, which could date from medieval times back to the Neolithic. There are two known Roman settlements either side of Coppet Hill – at Courtfield in Welsh Bicknor, and on the Huntsham peninsula which is in Goodrich parish. The original trackway from Goodrich to Welsh Bicknor leads up the western flank of the Hill – and is visible on aerial photographs as a hollow way – and joins the ridge path leading down towards Hentland and Huntsham at the boundary of Welsh Bicknor

There is evidence of the Roman presence on Coppet Hill as a bronze dodecagon gaming piece was found there and also a hoard of Roman coins, both now lost.﻿

As uncultivatable ground, the Common was classed as 'waste' of the manor, but it was still extensively used for rough grazing and for supplying 'underwood' and the occasional large tree for timber. The original shape of the common was typical, with funnel-shaped projections leading to gates or 'yats' at various places around the perimeter – the traces of the shape can be seen on the older OS maps. The original boundary on the Goodrich side is marked by a boundary bank, sometimes obscured by later fences. The boundary between Goodrich and Welsh Bicknor was under dispute many times, mostly because of the valuable limestone deposits. From just above the limestone quarries near the Courtfield cattle grid right along the boundary to the Symonds Yat end of the ridge can be found a stone wall. This was built in the early 1800's by one of the Vaughans of Courtfield, in the process cutting off part of the Common. In some places the original boundary bank can be seen on the Welsh Bicknor side of the wall. Below Symonds Yat, a large area was enclosed as a field from the Common before 1718, when the first manorial map shows it in existence.﻿

The manorial court rolls date from the 16th century, when fines for these encroachments added to manorial income. No doubt there were temporary dwellings before this for limestone workers and charcoal burners – there are some charcoal burning platforms on the Hill, and remains of dwellings below the cattle grid where limestone has been cut away from the hillside to form a great cliff. Limestone has been quarried from this area for hundreds of years, both to aid iron-smelting and to burn for land improvement.﻿ 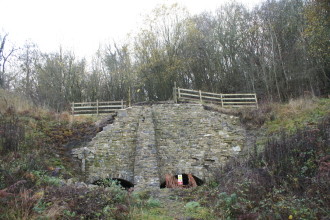 The only lime kilns within the Trust's land are 19th century in style, and lie just above the road to Courtfield. Below the cattle grid, there is an older single kiln which lies inside the Welsh Bicknor boundary. There is another huge limestone quarry just inside Welsh Bicknor, as the ridge path drops down towards Symond's Yat. Stone from here was used to build part of Courtfield House c1800. 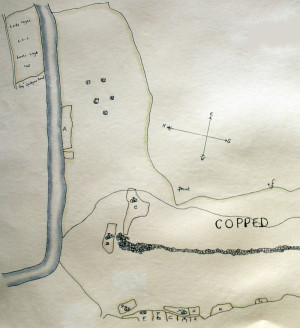 The 1718 map also shows encroachments, both of land and dwellings on the Hill. The houses at the bottom numbered 5 is 'The Thatch'

The encroachments for dwellings made on the Hill are not all occupied today, and this has largely depended on the proximity of roads. The settlements directly to east and west of the current Welsh Bicknor road have flourished. A number of the houses date back to the 17th century, though they are considerably altered and extended. The only exception is in the small settlement below the road near the cattle grid. On the crest of the Hill is a ruin known as the Folly, although on the Goodrich side of the boundary wall it did always pay tithes to Welsh Bicknor. Further along the crest, originally part of the Common, is the deserted settlement known as 'Jelemy's Tump'. This is named after an early 18th century encroacher called John Jellamy, and is now blocked off by the wall. It was last inhabited in the 1970's. Within the woodland boundary behind Hentland Barn, but not owned by the Trust, is another deserted settlement.﻿

In the 1820's Joshua Crystall the watercolour artist painted many of the dwellers on the Hill, as they burned or gathered ferns.﻿

Leading from one of the paths along the western flank is a long straight track leading to a deserted sandstone quarry, where there is a small stone building believed to have been built by the quarryman for the safe storage of tools. The track was used as a rifle range, and spent bullets and cartridges dating back to the 1850's have been found there.﻿ 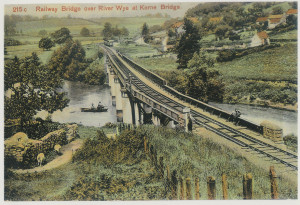 Local people call the path leading from Kerne Bridge railway station across the railway bridge over the Wye and up to the road the 'Soldiers' Path', presumably because soldiers could use it to make their way to the rifle range. Goodrich Manor sold Coppet Hill and the remaining houses it owned on the Hill around 1920.﻿

Not all the archaeological features on the Hill have been identified or surveyed. As part of a local history project, and with the Trust's permission, it is hoped to continue to use modern positioning equipment  to discover and record accurately features such as charcoal-burning sites and earthworks which can be difficult to find again.