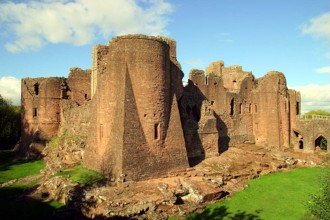 Goodrich Castle was owned by the Lords of the Manor, but few ever lived there

Coppett Hill (earlier Copped Wood) became a possession of the Manor of Goodrich when Goodrich Castle and the manorial lands came into the hands of the Lords of Monmouth after the Norman conquest, and then to William Marshall, Earl of Pembroke in 1204. An early mention of ‘Coppyngewode’ in 1372, shortly after the Black Death, says that it is ‘worth nothing but for big timber’, unlike the Doward where charcoal was made. Goodrich has many traces of iron-making, and the demands for charcoal may have lead to extensive coppicing, and the open character the Hill has today.

From the 17th Century complaints of ‘incroachments on Copped Wood’ start appearing in the manorial court rolls. The incroachers, some of whom had built cottages on the incroached land, were fined a regular amount. This was a way of the absentee lords of the manor increasing their income, and was a rent in all but name. The earliest map of the manor in 1717 shows the incroachments, some with houses, and names the incroachers. By 1735 the manor officials were trying to convert the ‘fines’ to regular leases or freeholds, but not all took up the offer.

When the then Lord of the Manor, the Earl of Kent died in 1740 without a male heir, his estates at Goodrich were sold off. The ruined castle and the wasteland of Coppett Hill were bought by Thomas Griffin, a naval officer who lived farther down the Wye at Hadnock, Monmouth. He thus became Lord of the Manor of Goodrich. A few years later, Griffin faced a court martial, accused of twice failing to engage the French fleet in war at sea, but he went on to become an Admiral and a Knight. When he died, the property passed to his brother and it was to remain with the Griffin family for several generations. During this time, the remnants of the feudal Manorial system were swept away in an agricultural revolution. Little was left but the laws governing wasteland like Coppett Hill. Traditionally and legally, the Lord of the Manor owned the wasteland, but manorial tenants had the right to use it for grazing, gathering fuel and for recreation, and the land could not be enclosed without Parliamentary approval. These rights were known as 'rights of common' or ‘commoner's rights'; these rights are attached to the residents of some 13 houses on the Common and still apply today.

In 1919, the Lord of the Manor, Mrs Louisa Bosanquet, put the Lordship of the Manor  up for sale, together with the castle and the common, and other property. In a sales brochure, her agents noted that the rents from the cottages (none more than £7 p.a., most much less and all inclusive of rates) were 'totally inadequate' , not having been raised for some years. They suggested that the rents 'might be considerably increased, and that the cottages could by 'judicious expenditure be made into charming week-end and residential cottages and homes.' Most of the cottages were sold for less than £200. The topmost cottage, then called Cook's Folly, which was let to a Mrs Barnes for 5s. a year and had four walls but no roof, went for £70. Tenants who could not afford to buy their homes now risked losing them. Among the new owners one sees the vanguard of a new type of settler, the commuter, the weekender and the retiree from the town, all mobilised by the railway at Kerne Bridge, the motor car and the autobus.